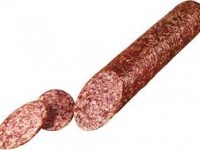 Import of sausages by the United States makes relatively large volumes and fluctuates close to 40 million. $ per year. Canada is the  largest supplier of sausages to the USA, which accounts for about half of all the import in the United States. At the same time, the European countries occupy 50% of US imports of sausages. The product quality is a key requirement for the procurement of sausages from external sources. Therefore, the supply of quality and cheap varieties of sausage from the CIS may well be accepted by US buyers. Rather substantial export of the Polish sausage to the United States implies on the existing market opportunities for the exporters from the CIS countries because of the similar quality as well as logistic cost of shipment. However, it should be noted that the free trade zone between the US and the EU provides a significant advantage to European suppliers. Therefore, the only chance for the CIS exporters to enter the USA market is to compete by the price discounts.

The largest importers of sausage among the USA’s states are Puerto Rico, New Jersey and Pennsylvania, which account for more than half of all imports of sausages. Overall, the prevalence of the eastern states in importing sausage is a positive factor for potential suppliers from the CIS since it is more convenient and fast for them to ship the sausage cargo to the Eastern ports.